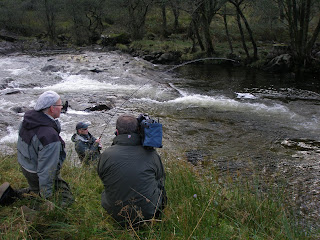 Well, we’ve pretty much managed to complete our electrofishing fieldwork for this year, which given the amount of rain we’ve had was a herculean effort. Danny well and truly has his feet under the table, however we have to say a sad farewell to Hazel Stanworth. Hazel has been a seasonal fieldworker with us for the last 4 years, and in addition to being a hard worker, lit up the trust with her bubbly personality and cheery disposition. The Environment Agency have got a good ‘un there, and Hazel will be sorely missed. Good luck, Haze!

Alan did some filming for a BBC Alba show, Turus a Bhradain, about fisheries in Argyll. The programme should be aired in Spring 2012, so keep an eye out for it. Especially as Alan caught a fish!

Craig also took part in BBC Radio Scotland’s Big Debate in Inveraray in October. As well as questions about fisheries and aquaculture, other topics included energy prices, gay marriage and benefit payments, about which Craig new virtually nothing!

AFT had it’s AGM in October, which despite a poor attendance still managed to generate lively discussions, not least about the Sustainable Inshore Fisheries Trust’s campaign to reinvigorate fisheries in the Firth of Clyde. Thanks to Bob Younger and Charles Miller for coming to our AGM! See more about SIFT’s campaign at www.sift-uk.org/.