The newly constituted Fishery Management Scotland (FMS) held their first members meeting yesterday followed by the FMS conference today. The conference is basically a continuation of the ASFB/RAFTS conference that was held annually for the sector.

New chairman Alistair Jack opened both days and soon alluded to his enthusiasm for mergers within willing Trusts and Boards following the Scottish Governments abandonment of plans for the formation of FMO’s. The government announced they would be willing to facilitate mergers wherever they could as part of their U-turn away from compulsory FMO establishment. Alistair Jack indicated that Boards and Trusts had receive a vote of confidence from the Government with this announcement but some of us remain rather sceptical of this and are firmly of the opinion that Boards are allowed to continue due to the lack of funding to fill the gaps rather than a result of overwhelming government support. Regardless, Boards will continue to provide the only source of revenue for the wild fisheries sector, collected through the salmon levy system, so quite rightly, the focus for DSFB and Trust work will be dominated by this species in the absence of other funding sources. However, by improving habitat and water quality for salmon, other species will of course benefit too.

The chairman also suggested that the 3-4 £Million shortfall in fishery management may be raised through a tax on aquaculture and I expect this may not be viewed favourably by that industry or ours for that matter. There are of course other ways to skin a cat but Scottish Government speaker Geoff Gibbons quickly ruled our punitive measures for aquaculture failures such as escapees or other breeches within the industry but instead encouraged dialogue between the sectors.

The members meeting discussed various points about the future operation of the organisation in the morning, followed by afternoon workshops on various topics that concerned the members such as Finance, Hydro’s, Water Framework Directive, Predation etc. The aim was to highlight areas that the FMS team should be focusing on for their member organisations. These were I think beneficial to both FMS and the participants. 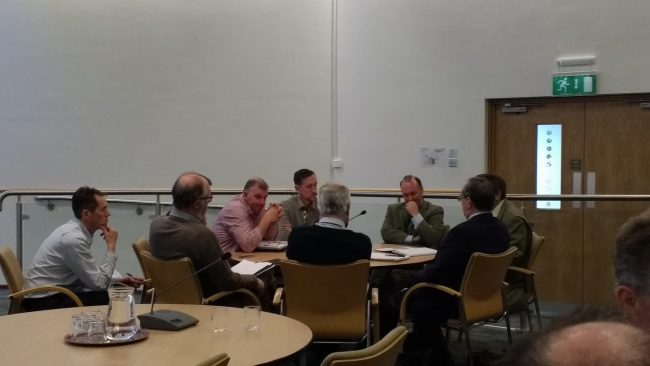 The predator workshop where seals, piscivorous birds, bird counts and protocols and other issues were discussed at length. Other workshops were underway simultaneously after which we all heard the summing up. I’m sure these were helpful to all those in attendance and to FMS staff. Photo courtesy of Chris Conroy, Ness DSFB.

The conference was well attended as usual and the audience consisted of many with an interest in fish and fisheries including Marine Scotland representatives, SNH, Aquaculture, Trust biologists and Boards officials and many others too. The presentations were both interesting and enlightening on the whole and questions and answers were free flowing.

We left at the end of the two days armed with 2 boxes of the FMS annual review for distribution to anyone in Ayrshire who wishes a copy. This is the replacement for the ASFB/RAFTS annual review of previous years and follows the old format. It is an excellent publication that details reported rod catches around the country and features articles detailing key topics and work streams across the board and Trust network. 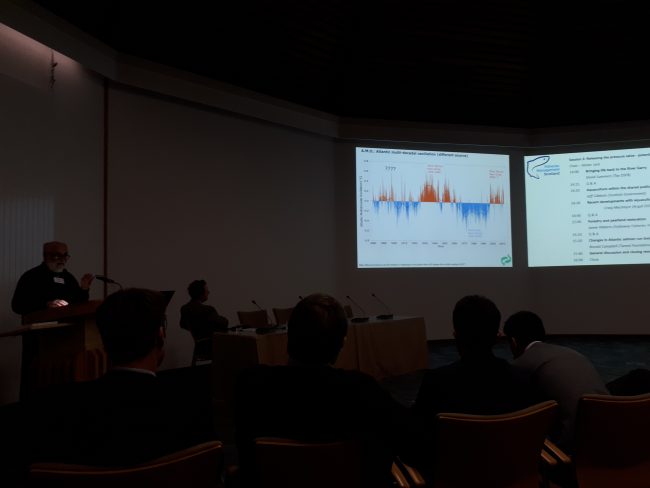 Ronald Campbell from the Tweed presenting his fascinating theories on salmon and grilse oscillations in the Tweed catchment over many decades.

ART would like to congratulate Dr Alan Wells and Brian Davidson from FMS for quickly putting together these events and delivering such an interesting range of speakers. Well done to you both.

Finally, we would like to express our gratitude and thanks to Dr Chris Horril from RAFTS who was in attendance today. Chris has the unenviable task of winding up RAFTS business and concluding many hidden tasks associated with this. It was in many ways a sad day as Chris seen to have been around forever and served all RAFTS members well in his time. He will be sorely missed by the Trust network but hopefully he will be around in some capacity for some time yet. Our thanks and best wishes to Chris for all his hard work over the years.

For decades, something in urban streams has been killing coho salmon in the U.S. Pacific Northwest. Even after Seattle began ...
Read More
December 4, 2020 / News