Fish poaching is a broad term and is used to describe the use of an illegal method, fishing out of season, retaining fish in certain condition or fishing without permission. All are criminal offences. Individuals involved in fish poaching are often associated with other forms of criminal activity, so it is important to recognise that it should not be considered as a problem in isolation from other crime. Fish poaching can take place in rivers and lochs, estuaries and on open coastline.

What are we doing?
Fish poaching is formally classified as a wildlife crime by Scottish Government and through the Partnership for Action Against Wildlife Crime (PAW) we continue to raise the profile of fish crime, including the associated socio-economic impacts. This process helps to  inform the need for new legislation and improved penalties and also ensures that fish have greater prominence in a range of discussions, publicity and policy formulation in relation to wildlife crime. We provide focussed input to PAW’s Poaching Delivery Group, which has produced an action plan to tackle poaching and hare coursing. This now means that Scottish Government, Police Scotland, the National Wildlife Crime Unit and Crown Office all have a better understanding of fish crime and this has improved our response to tackling illegal fishing. 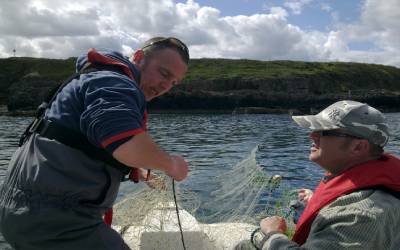 Our key priorities are:

Read the ninth Wildlife Crime in Scotland: 2020 Annual Report which was published in April 2022