In 2017, unprecedented numbers of Pink salmon were captured in Scotland. A similar situation was observed in 2019 and 2021, and in the same years Pink salmon were also reported in Norway, Finland, Iceland, Denmark and Germany. Pink salmon are not native to Scotland and are likely to have ‘strayed’ from some of the rivers in northern Norway or Russia. We are working to assess the impact of these non-native fish.

Pink salmon (Oncorhynchus gorbuscha) were originally introduced to some Russian rivers in the 1960s, and they have slowly spread westwards to colonise some northern Norwegian rivers. These fish spawn at a different time from Atlantic salmon, have a two-year life-cycle and generally spawn in summer (and often in main river channels in the lower reaches of rivers, and sometimes in upstream tributaries).

Due to their two-year life-cycle, juvenile fish will be derived from distinct ‘odd’ or ‘even’ years, with the Russian/Norwegian fish being odd-year stocks. The reasons behind the unusually large numbers since 2017 remain unclear. We know that the population from the Russian Kola Peninsula tends to be stronger and more numerous in odd years rather than even years. 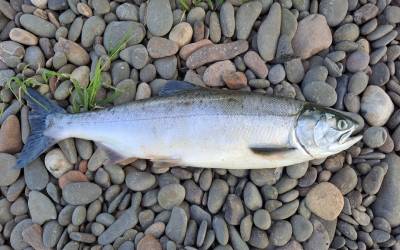 We have been working with our members to record sightings of pink salmon and to assess various means of removing these fish from our rivers. We have published a report of this work for 2021. Liaising with Marine Scotland, NatureScot and SEPA, Fisheries Management Scotland have produced detailed guidance on what to do if you capture or observe Pink salmon in Scotland, together with a reporting tool for recording captures or sightings. Marine Scotland have produced a Topic Sheet on reporting Pink salmon in Scottish waters.