Electrofishing surveys are undertaken by fisheries managers, scientists and regulators to capture and count juvenile fish, primarily in rivers. Where electrofishing is performed according to carefully defined standard operating procedures (SOPs) and combined with appropriate statistical analysis, it is possible to estimate the number of fish in a particular section of a river, or by upscaling, the total production of fish in a river or region. 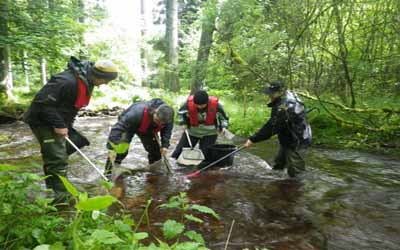 Electrofishing data are one of the most commonly collected sources of information on the status of freshwater fish populations. However, they are not currently used to assess the status of salmon stocks at a national level because (1) until 2018 there was no strategic, statistically designed national electrofishing programme, and (2) the analysis and interpretation of electrofishing data is associated with substantial technical challenges.

Marine Scotland has undertaken a programme of research to address these challenges, with the overall aim of developing a juvenile assessment method that can be used to determine the status of salmon populations at a range of spatial scales, from individual electrofishing sites to catchments and regions (Figure 1).

The National Electrofishing Programme for Scotland (NEPS) provides the data necessary to carry out an annual assessment of the status of Scotland’s salmon stocks using electrofishing data. The first national survey was carried out in 2018 and this was be repeated in 2019 and 2021. The survey is designed, managed and analysed by scientists at Marine Scotland Science (MSS). Data is collected by local fisheries managers according to protocols developed by MSS in consultation with the Scottish Fisheries Coordination Centre (SFCC).

The NEPS data can be visualised at a range of spatial scales using the NEPS R Shiny Application. Additionally, Marine Scotland have produced an Electrofishing Analysis Tool, which allows for the comparison of observed fish density against a modelled benchmark density. This tool has been supplemented by SFCC’s Data Conversion tool, which converts electrofishing data from the SFCC Database into a format which can be directly imported into the Electrofishing Analysis Tool.

Grant Funding Received
This project is funded by Marine Scotland and Crown Estate Scotland to the value of £599,000.