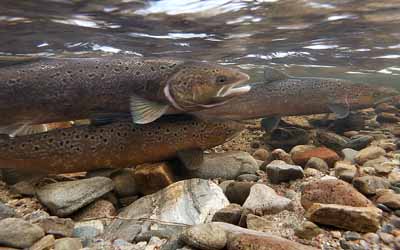 There is a hole in the river, a hollow gouged out during the ice age that has since become a broken, rock-walled sink.

A landmark headwall rears above it, and it is this that the salmon – and the river – must negotiate. The river divides around it to left and right.

So, crammed between the broken ends of the wall and its alder-lined banks, the river tumbled sideways into the sink by way of 10 separate falls that collided and mingled in joyous reunion moments later in the depths of the sink under the wall, and the colour of that reunited river was sunlit snowdrifts.

The river’s problem now was how to get out again. Almost all of it was forced into a narrow channel of imponderable depth where the curved wall of the sink’s downstream edge had long since burst apart.

That channel, just a few yards wide, was suddenly commanded to bear the burden of almost the entire river, which was 20 times as wide before it hit the headwall, and the resultant volume, speed and power would reduce you and me to ruins, broken into many pieces.

Yet it was this channel the salmon must swim through – upstream – to effect the explosive jump from the innermost depths of the sink that would carry them to quiet waters above.