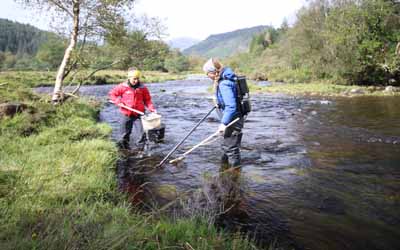 Ness District Salmon Fishery Board had the chance to rescue some fish as Highland Council drained the Whin Park pond in Inverness.

The group shared photos and information about their discoveries on social media.

A spokesman stated: “We had two quick sessions in Whin Park pond with the electrofishing kit to rescue any fish present as Highland Council draw the water down prior to remedial works.

“We had previously deployed fyke nets in the pond for a couple nights during which time we only caught one eel. We were, therefore, quite surprised to see how many eels were in there. We caught 114 eels in total, plus some other nice fish.

“All fish were released into the adjacent River Ness.”