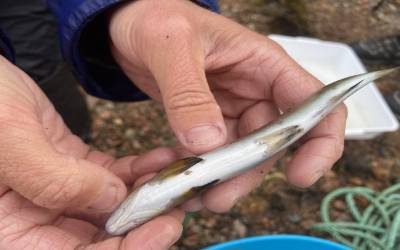 Each spring in rivers across Scotland something remarkable happens – a miraculous transformation that prepares young salmon for their epic migration to rich feeding grounds in our cold northern seas.

After spending two or three years in rivers, young salmon, or parr as they are known, turn silvery and turn into smolts (about 12-14cm long), and quickly drop downstream into the sea to begin their marine stage. The timing of the annual smolt run is summed-up by the couplet:

‘The first spate in May takes the smolts away’.

When fly-fishing for trout, I occasionally catch smolts on my home river, and I am always in awe at the iridescent silvery beauty of their glistening flanks.

It never ceases to amaze me how such a small and fragile fish can endure the harshness of the north Atlantic on storm-tossed feeding grounds in the seas off the Faroes, Iceland and Greenland, and perhaps even as far away as Baffin Island in Canada.

With my heart heavy with emotion, I carefully release the smolt back into the copper-burnished water of the river, speeding it on its way with a silent prayer of hope that it will survive to return to its home river one day to spawn as a mature adult.