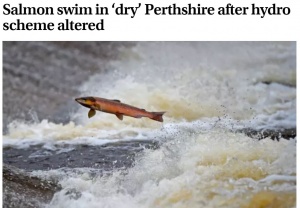 Salmon are leaping in a scenic Perthshire river for the first time in nearly 70 years after pioneering work was carried out to restore flow cut off by a hydro-electric scheme. A ten-mile stretch of the River Garry, which had been dry since the mid-1950s, is now running with water, promising major benefits for local salmon populations. The move comes as a result of a landmark agreement between energy firm SSE, the Scottish Environment Protection Agency (Sepa) and Tay District Salmon Fisheries Board (TDSFB) to allow water to flow once more from Pitlochry dam. The work – which included the removal of a weir at Struan that had acted as a barrier to migrating fish – was designed to have maximum environmental benefits while minimising the impact on potential power generation.