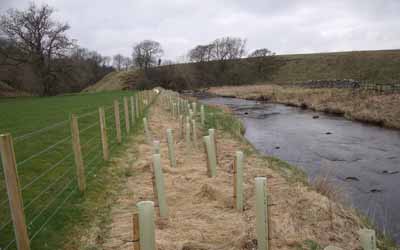 The transformative project is one of the most ambitious habitat-restoration schemes ever tackled by the conservation charity.

Glen Geldie is the largest nature reserve in the British Isles, but lost much of its native tree cover around 2000 years ago. The Geldie Woodland project led by the National Trust for Scotland on its Mar Lodge Estate, aims to restore this by planting more than 100,000 native Scots tree species along the banks of the River Geldie.

The project is being delivered in partnership with the Dee District Salmon Fishery Board, River Dee Trust, the Cairngorms National Park Authority and Scottish Forestry and it is hoped that over time the project will help combat soil erosion, mitigate flooding and save endangered wild salmon and other threatened species.