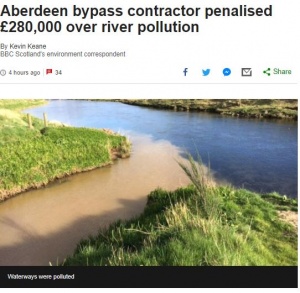 The contractor building the new Aberdeen bypass has been issued with a £280,000 penalty for polluting two of Scotland’s most important salmon rivers, BBC Scotland can reveal.

The Aberdeen Roads consortium was responsible for a series of silt pollution incidents on the rivers Don and Dee along with some tributaries.

The incidents between 2015 and 2017 stopped construction for several weeks.

The money will be distributed among local community groups.