On August 20, 2020, Mowi’s salmon farm at Carradale North shifted position after its seabed anchors became dislodged during Storm Ellen. The farm consisted of 10 circular net pens containing a total of 550,000 salmon of approximately 4.2kgs in weight. Four pens were damaged, two of which experienced torn netting. Mowi have confirmed that 48,834 farmed fish have escaped.

We are working with our members, Marine Scotland and Mowi to monitor and mitigate where possible in an attempt to minimise the number of farmed fish entering the rivers draining into the Firth of Clyde. Fisheries Management Scotland have been informed of significant numbers of farmed fish caught by anglers in multiple rivers across Loch Lomond, Ayrshire, Clyde and Argyll. Fish have also been reported from Islay, River Annan, Border Esk, River Eden SAC, and the River Derwent.

Mooring line failure at the southern end of the pen group was identified as the root cause of the incident. Mowi report that this failure was due to abrasion when the feed barge mooring lines came into contact with pen grid mooring lines.

Fisheries Management Scotland have produced guidance on how to ID farmed fish and the steps that should be followed and are asking captures to be recorded in their central reporting form.

Fisheries Management Scotland are working with our members to ensure everything is being done to monitor the situation and mitigate the impacts where possible. In addition to this, we have worked with Marine Scotland Science and Mowi to design a genetic monitoring project which will allow us, in partnership with our member District Salmon Fishery Boards and Fisheries Trusts, to assess and understand the impact of this escape. This will also form the basis for future monitoring and mitigation programmes which can be built into a reformed regulatory regime for fish farming in Scotland.

It is important that escaped fish are recorded centrally with Fisheries Management Scotland so when a fish is caught please fill in the online form. It is crucial this information is passed on to all those angling so that we have the information available in a consistent manner.

Following identification, escaped farmed fish should be humanely dispatched. Scale samples should be taken from behind the dorsal fin, and these should be sent to: 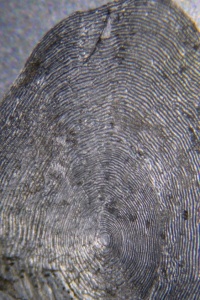 Scales should be stored in paper, not plastic; an envelope or kitchen roll are ideal. Scale samples will be read to ensure the fish was farmed and understand more of its life history.

Similar to what can be seen on a tree, salmon scales show growth rings. Farmed scales show rapid and uniform growth in comparison to wild fish whose growth is dependent on seasons and habitat.