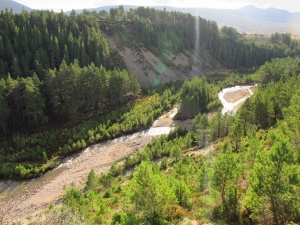 Freshwater fisheries and associated expenditure such as salmon angling, accommodation and tourism are worth almost £80 million a year to the Scottish economy. However, the number of adult salmon returning to Scotland is in decline, and 2018 was the lowest recorded rod catch since records began in 1952. It is therefore important that salmon habitats are protected and improved where possible.

River temperature is a critical control on Atlantic salmon populations which are adapted to live in relatively cool water. Salmon tend to prosper when temperatures are in the teens and struggle much above 20°C. Where river temperatures exceed 23°C this can cause thermal stress and behavioural change. At 33°C salmon can no longer survive, even for a few minutes.

During the summer of 2018, it is estimated that around 70% of rivers in Scotland experienced temperatures over 23°C. UK climate change projections provided by the Met Office indicate that summers like these could occur every other year by 2050, increasing concerns over the future of salmon in Scotland.