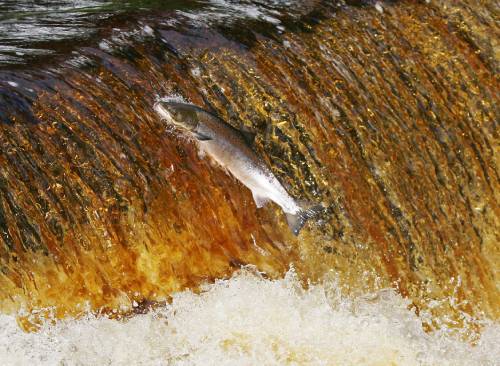 November 10, 2021January 17, 2022
Salmon can tell us a lot about the progression of climate change, and if we heed the warnings, they can play a role in slowing it down. A unique art installation at COP26 could help spark a new wave of support.
Some estimates say more than 30,000 delegates have descended on Glasgow for COP26. After pausing last year because of the pandemic, the annual climate change summit is back, with an intensified sense of urgency from the businesses, public leaders, activists, ministries, and Indigenous communities in attendance. Since the release of the United Nations’ bleak IPCC report in August—a code-red call to action to accelerate the work needed to cap global warming at 1.5 degrees Celsius—and President Biden’s September announcement that the U.S. would double climate change funding by 2024, it’s a can’t-look-away moment for this critical issue. COP26 has the potential to drive much-needed momentum in this race to save the planet. Still, some issues are vying for a spot on the agenda. Surprisingly, one of them is salmon.
A life defined by an epic journey

Wild salmon are an active, determined species that undertake an incredible journey during their lifetime. Born in rivers and streams, they migrate to the ocean as young adults. Their bodies adapt to the saltwater, where they usually spend several years and swim thousands of miles, feasting on fish, crustaceans, and invertebrates. Returning inland to spawn, salmon physiologically transform again for freshwater survival and to attract a mate. Their adventure ends where they were born, a place they identify by its smell. Feeding more than 130 different species, dead salmon also release nitrogen when they die, fueling the growth of streamside forests that capture and store carbon.