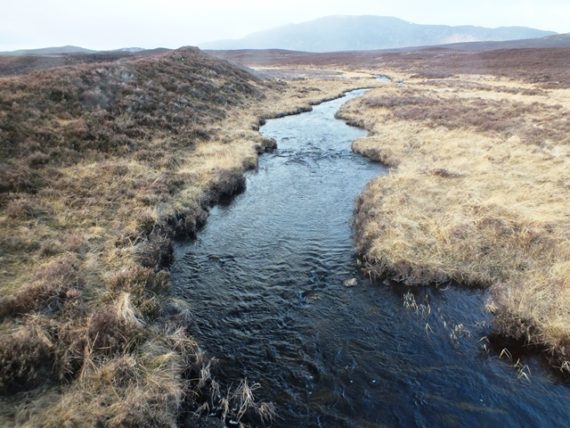 The ideal spawning burn has to have a few essential ingredients; first and foremost spawning gravel, without which no salmonids could exist. Secondly there must be juvenile habitat, shallow riffly water for the fry in their first summer is ideal along with deeper; cobbly or bouldery water, fast flowing, if possible, for the older parr. If there is the occasional deeper hole or shady undercut bank alongside a deep glide, to provide refuge for adults, you have the ideal mix. Someone went even further and published a paper on the ideal mix, concluding that what required was one unit spawning gravel, two units for the fry and three units parr habitat, That, it was stated was the formula for the perfect spawning burn. The perfect angling burn, or more likely river, requires something else, but that is not the subject of this blog.

We are blessed with many, many, burns in the Spey catchment that could be classed in the ideal category; the upper Fiddich, Livet, Allt a’ Gheallaidh, Tulchan Burn, Cromdale, Conglass etc. But not all…

I took the opportunity last week to spend the day getting to know an upper Spey burn that I had been meaning to get acquaint with since the summer of 2013, when I first met her. This burn, which shall remain nameless, posed a few questions after the initial date; why were there only parr at that site, that site should have supported more and what about the loch in the middle?

It was quite easy to answer the first question.

The burn above the loch, great parr habitat but barely any spawning gravel to be seen. With the weed growth it was very reminiscent of burns I used to know in the Hebrides.

I suspect there are spawning gravels below the weeds. If so I know the answer, the only thing is that it involves a great deal of hard labour! I would be worthwhile preping a couple areas before next autumn to see if they were used by fish.

Moving downstream the first gravels were seen a short distance above the loch.

The first spawning gravels seen and the first redd. This looked like a grilse sized redd under the left bank, just upstream of the two boulders on the right.

The loch is know locally as the Pike loch, although funnily enough the estate owner told me none are ever caught. The main characteristic lacking above the loch was spawning gravel; there was however an abundance of mixed juvenile habitat though, perfect for the few fry and parr present.

I skipped the lochside taking the vehicle downhill before approaching the burn at the outlet. The contrast with the upper burn was amazing, here there were an abundance of spawning gravels and the perfect gradient.

The source of this gravel was soon obvious, a tributary joined at the outlet, it was responsible for the transport of copious amounts of ideal spawning substrate.

The lower reaches of the tributary were lined with dense, even sized alders, the sure sign of a recent fencing enclosure. I walked up the tributary, curious to learn a little more of its character.

Above the fence the burn was more typical of the moorland fringe with a few old alders dotted about, a fertile seed source obviously.

The same burn from the same spot but looking down towards the fence. The trees have responded in the usual way to the removal of grazing pressure. I did wonder however which was the better scenario, the non regenerating moorland trees or the alder thicket below the fence? In the summer the young alders will cast a dense shade, for many years to come until a few start to blow, or fall over; then a bit more diversitywill appear in the tree age structure. Perhaps we should assist this process by planned thinning along the banks?

Back at the main burn the stretch below the loch was an almost continuous spawning bed for several hundred metres, there was however a distinct lack of parr habitat.

Ideal spawning habitat. although suspiciously straight, I suspect the hand of man.

Here I came across what looked like a remarkable fresh trout redd, it had that typical round and humpy profile. But, so fresh looking for late Feb? A late spawner or have flows really been that stable overwinter?

As the loch was left behind the sediment became almost sandy, with weed beds before the burn changed character again as the gradient picked up.

The burn a little further down, there was a lot of bedrock here and virtually no spawning gravel.

The rocky section extended for quite a distance. There were virtually no areas suitable for spawning until below this cascade where I am sure there were two salmon redds on the right bank where the burn widened allowing some gravel to remain.

Further down, closer to the confluence with the Spey, the habitat, for the first time, started to match the ideal spawning burn formula.

Great mixed habitat in the lower reaches, spawning gravel , fry and parr habitat all in the same photo. There were two salmon redds left foreground.

And more of the same.

My understanding of this burn increased no end, on this, the second date. Virtually no spawning above the loch, too much below, morphing into trout spawning habitat, a bedrock section – again virtually devoid of habitat, before the great mixed habitat in the lower reaches. I’m not sure if it was beginner that designed this burn, or not. However not every burn can be perfect, it has however got a fair bit of biodiversity interest this particular one to make up for the design shortcomings.

Proof that fish do spawn here, salmonid (a large one at that) bones found beside the burn below the loch. If I’d had the dog I’d would have no doubt found more but this estate is a bit game rich for Rogie!

The post The ideal spawning burn…… appeared first on Spey Fishery Board.