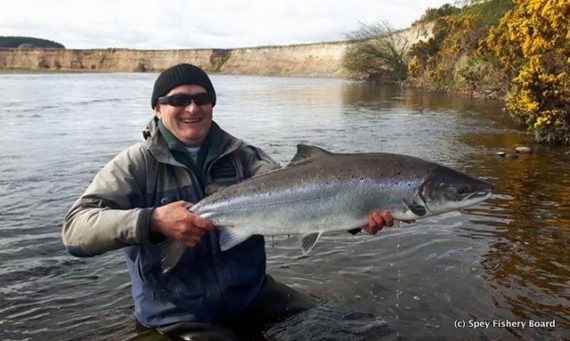 Last week’s forecast was fairly accurate but the wind strength again was under estimated. What little rain that fell was quickly soaked up by the dry ground and the thirsty vegetation, little or none made it into the river. Next week is forecast to be pretty similar, light winds, a small amount of rain early in the week with perhaps some more towards the weekend. Temperatures will peak just into double figures with perhaps even a frost some nights. The tides have peaked and there will be no new water till next week. What the middle and upper river needs is a day or two of heavy rain to bring the river up.

I was pleased to see the sand pipers at Knockando on Monday; I also spotted swallows and an osprey. My house martins have yet to arrive but they cannot be far away.

Catches, depending on which part of the river you’ve been fishing your opinion on the catches will vary widely. The Lower River continues to fish well but further upstream things are a touch slower, the low water appears to be holding the fish downstream.

I understand the Fochabers Association are catching fish; Ronnie Fraser is doing well, three on Friday including this one estimated at 24lbs.

I hear he also had three from the Castle Beat.

Ian tenant tells me they landed nineteen on the Gordon Castle Beats with almost as many lost. He kindly sent me a few pictures.

A party of Scandinavians led by Mattias Helde tenanted Orton. They finished the week with around a dozen. Thanks to Mattias for his pictures. He tells me he is planning two weeks on the Spey next year rather than his usual trip to the Dee!

Delfur had another good week, with about a dozen landed and a few more lost. Thanks to Mark and Grant for taking the time to send me plenty of photographs.

Rothes also finished with a dozen around a quarter were in the twenty-pound class. Superb fishing by any standards.

Craigellachie and Aberlour Angling Club had a fish apiece, and Kinermony had a couple.

The Northeast fly Casting Club from the north of England had taken Delagyle for the week along with a number of beats up and down the river. They had three and a large seatrout from Delagyle.

Laggan had at least a couple, Anthony Slater (8) had his first from Millionaires and Jessica Slater a 14lb fish from the stream thanks to Mike Murdoch for keeping me updated.

The Scandinavians reached as far up the river to Knockando Home Beat Jonas Runnberg had this lovely fish from Craig Steele.

A team of different Scandinavians had Phones for the first three days and landed a couple. Anders Oberg pictured below.

Information from above Knockando is as usual sketchy but I hear Grantown had a couple Both fish were caught in Little Stream, one of 12 lbs and one of 6 lbs.

They are also reporting a couple of sea-trout of up to 5lbs.