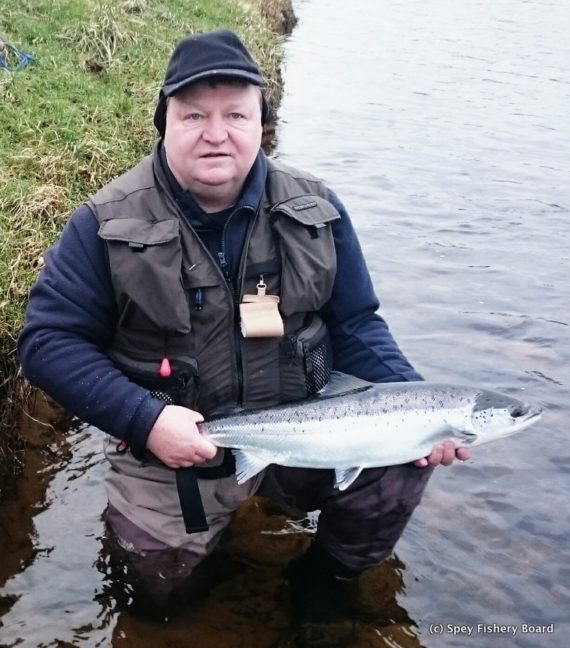 Well that is the first week of the season finished, although I hear some beats counted last Saturday as a week and already have finished week two!

It has been a mild week, Wednesday and Friday were very pleasant and I fished happily without a jacket. Even today although overcast the temperature crept up into double figures, I have to keep reminding myself it is still mid February. The warm spell mid week pushed up the river on Wednesday night.

Next week is a bit changeable, the week starts warm with temperatures reaching double figures on Monday, Tuesday will be wet, with a possibility of snow on Thursday and back to sunny by next weekend. It is difficult to predict what if any effect this will have on the river levels, my feeling is the river will slowly drop away, but I might be wrong. The tides are neapish today and building all week.

Catches: For the first week of the season catches have been pretty good; I see on Fishpal that the Spey is reporting catches from Abernethy to the sea!

Delfur’s season got underway on Monday when regular Jan Rigden had two fish from Beaufort on Monday morning. Alex Robertson had the first from Sourden on Thursday.

Rothes continued the excellent start to the week with fish on Monday, Tuesday and Wednesday, Thursday’s rise gave the edge to the beat above and I believe they had two after this.

I was pleased to hear that Kinermony’s season got underway on Monday when local angler Chris Morrison had one from the neck of the Boat Pool.

I understand Delagyle had a fish on Wednesday but have no more details.

I also heard on the grapevine that a fish was caught from Slioch, Phones Knockando.

As usual I can only report what I am told, I will be happy to hear from anyone on either malcolm@speygillie.co.uk or 07967970704.