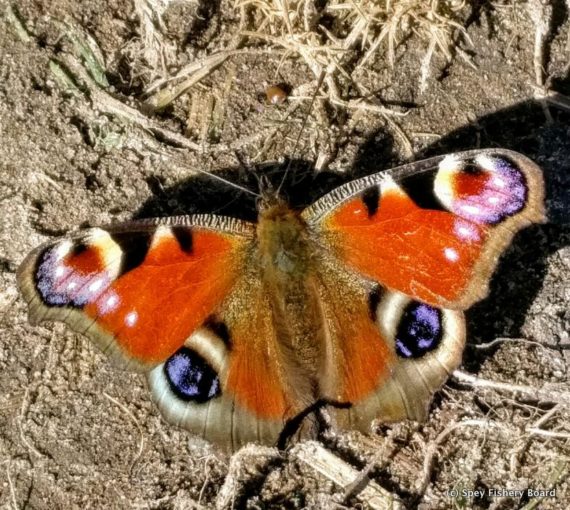 Well I think I will have to sack my weather forecaster, he predicted Monday was to be a light breeze, he should have tried wading down Collie with waves hitting his back! Other than that fundamental error the rest was pretty accurate. Today it is warm, hot for Scotland in March! Monday remains bright and sunny but then it gets overcast and cooler with temperatures remaining fixed in single figures. There could be some heavy rain on Wednesday night into Thursday morning giving the river a welcome lift.

The tides continue to build till they peak on Thursday.

I have yet to see the osprey this year though a couple of my fellow anglers have reported seeing one. Mark Melville tells me that the Chiff Chaff and Blackcaps are home. I noticed my first bumblebee and also saw a red admiral butterfly on Saturday. The Sand Martins and Sand Pipers should be arriving on Speyside this week.

Catches: Catches have been good again this week, for you cynics who suggest I only put in nature notes when I have nothing else to write about!

Gordon Castle had a fish on Thursday. Thanks to Head Gillie Ian Tennant for the picture.

Orton had a good week! Tony Considine had a 25lb fish on Wednesday. Kevin Greenlees , had one and I hear Ronnie Fraser had at least 2.

Rothes though not fully let finished the week with eight. Mike and Andy were kind enough to send me pictures.

I hear Arndilly picked away and am grateful to Mike Glass for his photo.

Craigellachie, had three, Dougie Ross says they catch fish when he has anglers out. After last weeks leg pulling I was very pleased to receive Neil Borthwick’s picture from the Garden Pool.

Aberlour Angling Club had another good week with at least seven landed. Amongst them was a fin-clipped fish for Bob Alexander. Which gives me a chance to remind everyone to check to see if their fish has been fin-clipped. The gillies and friends spent a good few evening fin-clipping juvenilles over the last few years the least anglers can do is to check and let the board know how many are returning.

Kinermony had four and as usual I am grateful to Davey Brand for sending me his pictures.

Wester Elchies had a good week with eight landed, and just as I predicted last week there was one over twenty pounds.

I hear Delagyle had three or four but have no more details.

Laggan had one from the bothy on Tuesday but again no more information.