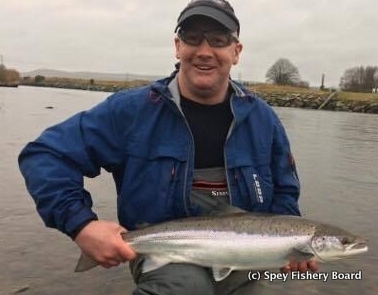 Last week’s forecast was not far off the mark, the heavy rain on Saturday pushed up the river in the afternoon but levels have already started to drop back. There is a little turbidity but hopefully that will start to clear by Monday morning. Next week’s forecast is more of the same. Temperatures will be around high single figures, there will be very little rain and the windest days will be midweek. The tides peaked last week and will start to build again midweek.

I have heard this week that some estates are not happy with me knowing what they are catching. If it really concerns them that much they can either get in touch with me to explain their concerns and perhaps stop their anglers posting on social media, good luck with that! On the other hand some new beats are beginning to send me information and more pictures. The Spey is the second best river in the country only being out-fished by the Tweed. The Tweed caught less than fifty more fish than the Spey although it fishes over 9 weeks more. Let us stop hiding these facts from salmon anglers and get the good news out!

Catches: Gordon Castle had another two fish, again on Saturday. I would suggest that when the numbers of anglers rises fish are caught down there. I am grateful to Ian Tennant for the picture.

Upstream Orton had a good week with at least six salmon being caught, the best estimated at 22lbs. A seatrout estimated at 7lbs was also landed and another around the same weight was lost.

Delfur continued to catch fish, finishing the week with five. Regulars Graham Ritchie and Alex Robertson continued there good start to the season landing one a piece on Thursday. On Saturday there were two father and son teams out, the older generation out fished the younger easily. Whether this was down to angling skill or positioning themselves in the best spot appeared to in some dispute. Alistair Morrison and Ian Borthwick were the successful dads.

Alistair Morrison with his gillie Grant

Rothes continued to catch fish. Mike Ewan sent me this picture of a slightly damp Robert Cardno on Saturday afternoon.

Arndilly also had a couple I hear.

Wester Elchies got their season underway with a fish from the Little Turn.

I hear Laggan had a fish last Saturday, but have no more details.

Ian Borthwick had his second from the Carron Beat on Monday, this time from the Sands. He was also one of the successful older generation, getting one from Collie at Delfur. He tells me you can’t keep a good man down, though Neil says it ought to be “put a good man down”

I hear Lower Pitcroy, Knockando had their first of the season.