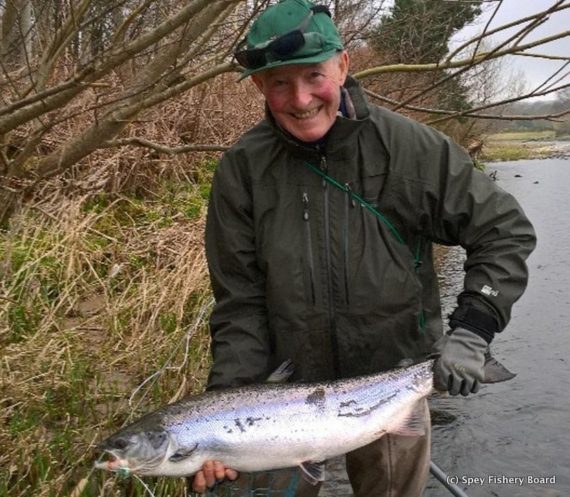 I have been forced to make some changes to the team, the lepidopterist has been sacked he could not tell his Admiral from his Peacock. I have employed an arborist and he tells me the larch is just coming into leaf. The ornithologist is on his final warning and would have gone as well but was saved when the Sand Martins turned up on Friday though the Sand Pipers have yet to arrive. The weather forecast guy had better get things right this week otherwise he is down the road as well.

Temperatures are forecast to remain just about into double figures this coming week, mainly overcast, with a little rain on Monday morning. It might be a little windier on Tuesday. The tides have peaked and there will be no new water till the weekend.

Catches. Again it was a good week on the river with most beats getting fish. Gordon Castle had at least three and a 8lb sea trout from Brae 2. Thanks to Ian Tennant and David Wood for the photographs.

Orton continued to fish well. I hear there were at least four fish estimated at over twenty pounds and the best a first fish at 26lb.

Delfur finished the week in the mid teens and I am grateful to Mark and his guests or the pictures.

Ian Ogden’s party fishing Arndilly ended up into double figures, the catch evenly split between the Brits and the Norwegians.

Craigellachie had at least four fish, the best to John Young from Broom Isle.

Thanks to Dougie Ross for keeping me informed.

The drop in river levels did not suit Aberlour Angling Club but the still finished with a handful visiting angler Ben Thomson had this one in the evening.

Wester Elchies had another good week with nine landed, towards the end of the week, it was hard to catch fresh fish with the number of kelts in the Boat pool. Phil Leask was delighted to catch his first Spey Spring fish pictured below.

Kinermony had at least four,

The Gordon Group had four from Delagyle but again the kelts dropping down proved to be a menace.

Laggan was fished by a party of Norwegians and they thought it was a very picturesque beat and still managed to catch five fresh fish. Pictues from Steiner Christenson and Thomas Larsen.

The RSAA organized another ladies weekend on the Knockando Estate and I was pleased to receive this picture of one successful percipient, Anne Henderson.

Bryan Herbert sent me a brief report of his successful day on Castle Grant beat 3 where at least three fish were landed.