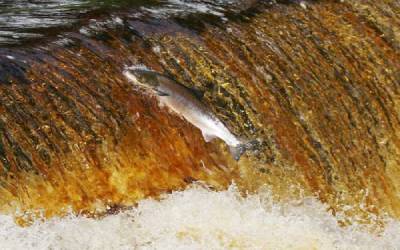 The event at the Turriff Angling Association lodge returned after a scaled down opening last year due to pandemic restrictions.

It is organised by the River Deveron District Salmon Fishery Board and The Deveron, Bogie and Isla Rivers Charitable Trust in association with The Deveron Single Malt Whisky.

The Morison Trophy for the person that lands the biggest salmon of last season was presented to Richard Breakell. He landed a 23lb fish at Ardmiddle. The McConnell Award for major contribution to the river was also handed over to Robert Shields. Mr Murray is currently filming The Crown for Netflix and is an avid angler who is passionate about wild Atlantic salmon and is an ambassador for the Atlantic Salmon Trust.