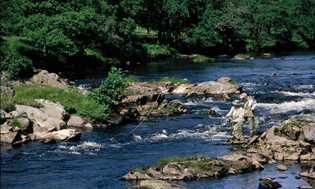 Actor Burn Gorman and author David Profumo performed the ceremonial task of opening the salmon fishing season at Meikleour on the River Tay.

Burn – who is set to feature in the next Hunger Games film – and novelist, journalist and angler David, made the first casts on January 16 after popping a magnum of Pol Roger Champagne.

The official opening ceremony was hosted by the Tay District Salmon Fisheries Board (TDSFB), Meikleour Fishings, and Perth and Kinross Council.

Anglers were marched down from Meikleour boathouse to the river by the Perth and District Pipe Band, led by Pipe Major Alistair Duthie.