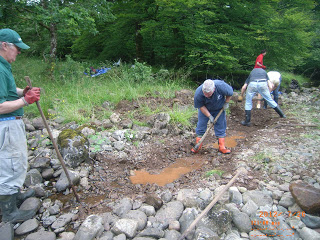 Further to the press release of 15th May 2012 announcing the new flow regime in the River Awe, the Argyll Fisheries Trust along with local volunteers took to the river to take advantage of the new ecology-focused flow regime to improve the chances of spawning success for salmon.  As reported, previously salmon were able to spawn in certain areas in the winter, yet their eggs were left high and dry when the river flow was reduced in the winter.
Previous river surveys had identified an area where eggs were left exposed.  Following consultation with SEPA, Argyll Fisheries Trust and their merry band set to work in the river in July to open up a previously blocked channel where salmon were known to spawn at the Old Bridge of Awe.  The success of this work will only become apparant next year, however the new ecologically-driven flow regime has already opened up new possibilities to restore this river to its former glory. 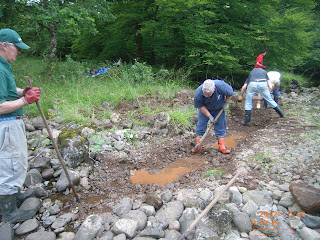 Our thanks go to Robert and Fergus Campbell-Preston, Panagiotis Pliatsikas and Ewan MacLellan for helping with the work.